When They Fly, Someone Dies... 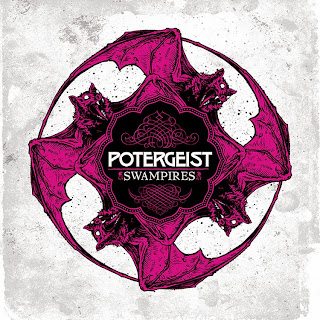 Alright, kids, we got a new, self-proclaimed genre for you...Swamp Metal. Not even I am sure of what that means, but let's give it a shot.
Hailing from Athens, Greece, Potergeist consists of five tough-looking dudes who know how to churn out the classic rock sound. On Swampires, the band's third major release, the majority of the tracks hit heavy with a clean sound promoting crisp chords and polished drumming. Vocals are a highlight, standing as tall as well-known voices like Howard Jones (ex-Killswitch Engage) and Phil Anselmo (Down). Keep in mind, this is a well-produced album that sounds like it's had a lot of work put behind it, but the end product speaks volumes as Potergeist creates an "arena rock" vibe for the 21st century.
Opening track "Swampire" explodes with chugging riffs that, at first, caused a little concern as the track could have easily followed a breakdown-by-numbers formula that would make the track cookie-cutter and boring, but the song soon switches into a hyper mode of dirty southern rock and raspy screams. While some tried-and-true metal cliches are present here, Potergeist keeps the energy fun and engaging. Well-timed solos and drum breaks help stave off monotony for the most part, but, to be fair, some of the guitar work drifts into familiar and safe territory from time to time, making it hard to differeniaite between certain tracks.
The biggest standout on the album by far is "Southern Crown," a slow burner full of cymbal rides and strong vocal work that catch the ear early on. While the remainder of Swampires never really seems to jump into the same spirit as "Southern Crown," it makes the song that much more effective as an early sampling. The track also features prominent backing vocals, a talent I feel the band should explore and play with more given their "big" sound.
Obviously the band has found their stride as strong support, having opened for such bands as Monster Magnet and The Haunted, but, with enough time and exposure to the masses, Potergeist could quickly become a force all its own.
~Joe