Music To Bar Brawl To... 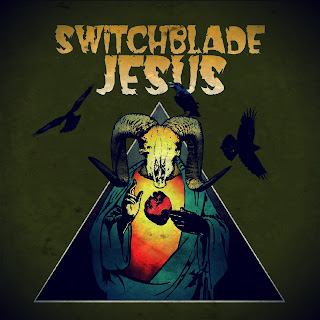 We've had quite a bizarre and obscure week or so of recent, not that we're not thankful or haven't enjoyed it! But I have to say, it's great to get back to some good old balls to the wall, riff heavy, dirty rock! It's always been the beating heart of this place and always will be. So when Eric dropped me a line this week and I noticed the first line mentioned Switchblade Jesus my instant reaction was "oh fuck yeah!". Why?... Well, for months and months I've been meaning to get on these guys (purely in the journalistic sense I assure you) but with one thing or another and the fact that we give priority to bands that actually contact us, in a first come first served basis, I just haven't had the time or chance to really give them my full attention... Oh, what a dick I've been!
Trust me when I say, it only takes about a 28 seconds to fall in love with Switchblade Jesus, I know. I actually counted. Whats more, I could easily give you a plethora of reasons why: They're like Down, but more fun. They have a pure rock fury to rival that of Clutch, and they're truly music to drink (copious amounts of) beer too... To give you just a few. It's really that simple. It doesn't have to be about bullshit shredding, machine gun style double bass drumming or mindless screeching into the mic. Sure, those elements have their merits in the right place. But sometimes all you need is some killer catchy riffs and a roaring vocal, and goddamn do these guys deliver just that! From start to finish it's full bore dirty southern rock carnage aimed directly at the beer drinkers and hell raisers. It's drips and oozes that quintessential attitude and classic groove thats only really exudes from those southern states, and in typical redneck style it doesn't let up for a second. Needless to say, this is exactly why I love it so much. It completely epitomises that bad ass southern rock style and swagger and instantly conjures up mental images of dusty dives bars, truckers and lot lizards. For me at least. That and a good old fashioned alcohol induced punch ups... Now, I've not been in a awful lot of bar fights. A few, but not a lot. Well, not a ridiculous amount. Ok, it's in double figures, but dont judge me! Anyway, for some reason I can remember pretty much every song playing in the back ground each time. Trivial, maybe, but thats always something thats sort of stuck in the back of my mind: Refused - New Noise, Slayer - Reign In Blood, Soilent Green - Build Fear, Cliff Richard - Devil Woman (don't ask). The point I'm trying to get to is that some time in the future I could quite easily see myself throwing punches to Sick Mouth off this very album. Straight from the opening bars I could envision myself causing absolute carnage to this track. I honestly don't know why this is my initial thought, maybe it's just what the opening riff evokes in my twisted psyche when I hear it, maybe it's because I've been drinking Makers Mark for most of the evening, I dunno. Either way I assure you I mean this entirely as a compliment. Hell, as I write this, it's already racked up 8 plays on my iTunes. In fact the whole album is slowly racking up plays counts and I honestly cant see it stopping any time soon. Well, not until our lovely friends over at Kozmik Artifactz pull the trigger and release the thing on vinyl!
Still, while you wait you really should head on over to the guys Bandcamp page and drop the meer 5 buck asking price for this little gem. It's dirty, its cool, it heavy and its ballsy as hell. It's the sort of album that knocks back one too many whiskeys, pins you against the wall, kicks you in the balls then leaves with your woman. In fact, if Hollywood ever decide to remake the film Road House, I'd strongly suggest they just stick this album over it for the soundtrack.
That would be genius.
~ Jay

For Fans Of; Clutch, Down, Orange Goblin, ASG, Planet Of Zeus