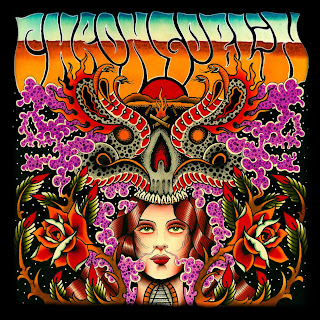 I love everything about Canada. Always have. The people, the hockey, scenery. My one and only gripe is that the place is just too bloody cold, and this is coming from a guy who lives in England! But as I was saying, everything about it's great, including these boys. I mean, just look at them...  How could you not love them!? Devin and Brett look like Jesus's heavy metal twin brothers, you can't help but want to pinch Josh's cheek, and Rich... Well Rich actually looks like a guy that tried to mug me once when I was 16, so I'll leave that there. Anyway, I digress, we hit Chron up a back in July and it's killed me to have been sitting on this little gem since. Why keep it from us I hear you ask? We'll because all you bastards are usually stoned out of your minds, telling you anything even just the day before something's released serves very little purpose. I can't blame you, but I do have to coincide some of these updates to their actual release date, and thats why we're here today! Yup, it may well be Friday 13th, but the news ain't all bad, Live For The Living is released today, so before you spark up another fatty, take a moment to peruse the guy's store, and maybe treat yourself to the vinyl for a mere $20! I'm pretty sure thats Canadian dollars too... So that's like practically free right? I really have no idea what's going on with their economy... They're like a larger version of Iceland surely, and Iceland are financially up shit creek at the moment, so... Anyway, I'm getting off track and the international economic crisis is evidently not my forté. Just go and buy it for christ sake, when have I ever let you down!? Sure, you've not heard the thing yet, but trust me on this... You're gonna want to.
So lets get down to brass tacks. If you read our entry back in July here, then you'll have an idea what these fellas are all about. But One Million From The Top was last year, and the Goblin have, for want of a better word, progressed a bit since then. The styles the same, don't panic! The sweet mix of metal, with a twang of southern rock and a 90's punk tone is still there in all its glory. Where the guys have really progressed is in their over all sound a production for this outing. Whoever they got to record and engineer this beauty really knocked it out the goddamn park! They've hit that perfect sweet spot of balancing absolutely everything without destroying the recording with that over produced nasty ass mix. So kudos for that. But naturally, it's the Goblin who ultimately deliver the killing blow here. The tightness, from track to track is second to none. I've no idea of their schedule over the last 12 months or so, but I'd bet my bollocks to a barn dance that they've been touring their asses off, because its only when you spend night after night, stage after stage with the same guys that you can produce something this layered and polished. There's not an producer in the world that can fake that in the studio.
So if you're looking for more furious groove and aggression than you can shake a (hockey) stick at then this will be right up your street! It ebbs and flows, pushing the boundaries of genres to breaking point with is churning mix of classic metal, early skate punk style execution and tactical use of break downs that leave tracks like Give No More and Any Day a harmonic chilled out doom like feel in parts. The most satisfying parts for me are the subtle and beautifully placed little snippets of classic metal that sneak their way in at certain moments, like early childhood flashbacks. Like the 1:37 mark of Control just instantly casts me back to early Metallica. Or the closing of Lonely Prey that shines like Guns'n'Roses in their heyday. Its fantastic, a puzzling mix in places and completely unorthodox at times, but with the shear style and competence that its carried out with you can't help but admire and be engrossed by it. I bloody love it!
~ Jay


For Fans Of; , The Grand Astoria, Winnebago Deal, Revolution Mother, No Fuzz

Live For The Living (sample)