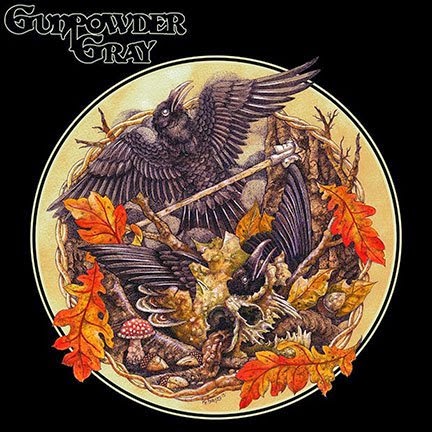 From the first chord of Gunpowder Gray's title track on their self-titled debut EP (hey, hat trick!), they rip into action, fueled by a high-octane mix of semi-grunged hard rock. In a lot of ways, it sounds like a time capsule from the glory days of Guns 'n' Roses, with near-soprano vocals tearing it up over noodly riffs from the guitar and slamming drums keeping things shaking loose. The crew dresses to match that era, with black leather jackets and torn jeans, shades and cigarettes; one of the guys even has a death-grip on his beer can in their group shot.
Lively, rambunctious, and undeniably retro-themed, Gunpowder Gray seem to be intent on having a good time and providing some rough-edged rock, so it's hard to fault them for that. At the same time, considering how much stoner rock has eaten up what used to be hard rock's territory, it does raise the question of whether fans of that general area of music will be wanting to drop the fuzz and go back to the cleaner, more stripped-down days of old. From listening to the EP, though, I think that as long as Gunpowder Gray can get people to their shows to share the energy, pound some beers or shots, and lose some inhibitions, they'll be happy with the results of their work.
~ Gabriel