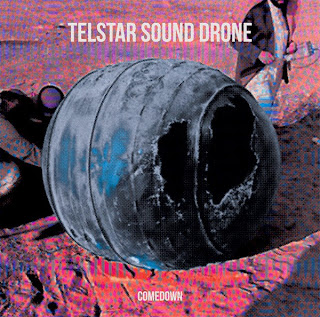 Comedown originally came out last year, and in the time since then, the album's built up enough surrounding buzz for Bad Afro Records to justify putting out a second pressing.  In case you didn't catch the original release, and you want to know why you should be interested, we'll begin with the question of how much you enjoy psychedelic rock.  If the answer to that question is positive, however you want to qualify it, then you'd do well to check into Telstar Sound Drone's musical output, which seethes with the tune-tied feedback of the most infamous '60s psych acts.  The songs don't so much play as drift into deep valleys, pushed whichever way the resonating tones want them, until the next track rises up into audibility and asserts its own groove.
It's really beyond me to try and describe just how fluid they make their music as the album moves through its paces, but touches used in addition to ~99% feedback settings on their pedals include a high-distortion rain-stick, persistent-echo vocals, and strangely-powerful background drifts of synths, while trying to figure out how they approached composing the songs just leads to one of those moments in which you shake your head in impressed disbelief.  They've put together a powerful and incredibly cohesive chunk of psychedelic digression, one which will cement the Telstar Sound Drone name in the minds of any open-minded psychedelic rock fan who takes the time to listen.
~ Gabriel