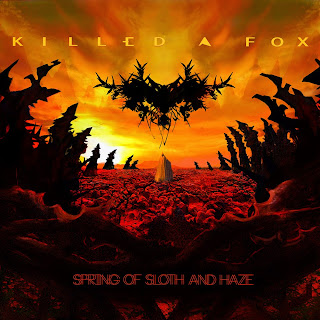 Spring Of Sloth And Haze marks the latest release (and the second LP) from the Croatian quartet of Killed A Fox (performing with one less guitarist after 2009's Fluorescence).  From the opening track of "Hive", they establish an off-beat style, letting rolling rhythms and unrestrained vocals take hold of the music and animate them beyond the basics of garage-flavored psychedelic rock from which they build.
Part of the extra seasoning they add to their mix of influences comes in the form of an almost grungy fondness for clean production without skimping on the fuzz for stringed instruments, which meshes with their inclination for clear melodies and sustained bridges in quite a pleasing way.  In a sense, at times, it sounds like desert rock that remembered to apply sunscreen before heading into the studio, so while things aren't as craggy and dry as usually sported by that genre's representatives, there's a similar fondness for creative uses of time signatures, sizable riff grooving, and some strong presence from the drums.  But the main quality of the music, at least as I hear it, is the sheer enthusiasm the musicians have for their work.  The songs sound as though they underwent innumerable changes while being refined by the group, resulting in a record jam-packed with unpredictable but organic twists throughout its run-time; just as you think you've figured out their plans for a riff, they take it in a new direction, pulse intact.
As long as you don't demand your music in overwhelmingly-fuzzed doses of at least 10 minutes a pop, there'll be something to tantalize your ears somewhere on this record.  There will be plenty of unexpected things popping up along the way, so once you've prepared yourself, pick up a copy and enjoy the surprises.
~ Gabriel