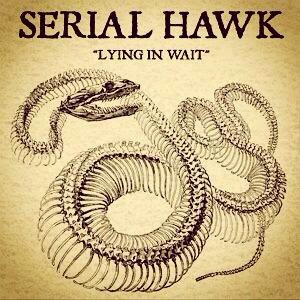 While Serial Hawk's new 7" hasn't yet been officially released, you'll have a chance to snag one if you catch one of the shows on their currently-running tour across the US.  If you're a fan of music so heavy that the reverb through your body lets you know which parts you should be exercising more, then by all means, get to one of those shows!
On to the release itself, which begins, as you might expect, with the title track.  "Lying In Wait" sets up low tones and intricate drum-work with slithering time signature changes and a potent dose of sludge, working the main riff thoroughly.  Despite the relatively short run-time, the band does a great job of filling the available space with a real sense of weighted doom.
The B-side is technically untitled, with just a nebula of stars covering its label; according to the band, this is something of a teaser for their next LP release, currently in development.  It consists of some very effective atmospherics, sounding just as vast and mysterious as the image used to represent it, and while it too is over far earlier than I'd have liked, Serial Hawk shows an excellent talent for channeling the more cosmic side of doom.
Between the two tracks, there's more than enough here to get buzz for the upcoming album stoked and ready; they've got creativity, technical prowess, patience, and a good ear for what works in their experimentation.  Tune into the band now, and be ready for things to come.
~ Gabriel