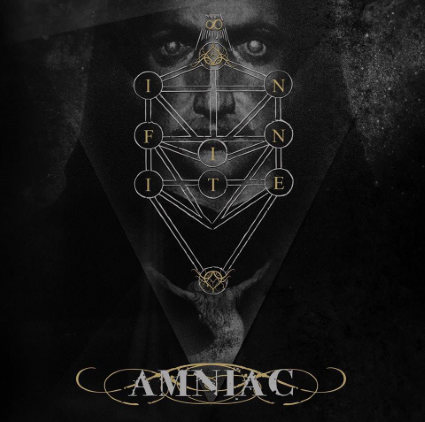 After a well received demo, the Greeks of Amniac have returned with their first full length album "Infinite". They tend to take the Post-Metal route with their music, utilizing melodic soundscapes just as well as crushing, Sludge inspired riffs. Simply calling them another Post-Metal band wouldn't really be fair though, while they pull some influence from that direction, they're probably also one of the most interesting bands I've heard that are put under that banner. Usually, Post-Metal just sort of bores me, you listen to ten minutes of ambient noise and neo-psychedelic soundscapes just for a riff and heavy jam session that lasts two and half minutes, then you get another three to five minutes of random noises to end on. While I'm sure there a number of people this would appeal to, I'm not one of them. Amniac seems to have figured out the secret to keeping things interesting on a track to track basis, using hundred ton Sludge riffs to drive the track forward like a steamroller, making sure things never get stagnant. Their opening track "And the Others Just Survive" could serve as a benchmark for their work, you'll get a good idea of their sound, but they have much more in store over the final six tracks. Opening with an expansive guitar part, it doesn't take long for it to all come crashing down in the form of a bone shattering riff and the guttural vocals of someone who clearly chews glass on a regular basis, they're pretty sick. Switching up again, and slowing the mammoth riff down some for a period of time, only for it to come roaring back as a sonic death march. Towards the end of the track that opening guitar part makes a final appearance that leads into an outro section that is closer to a Doom Metal song than Post or Sludge Metal, and a damn good one at that. While you can pick up the CD version from Distroball Records, you can also grab a digital version from the Amniac's bandcamp for just a few bucks if that's more your speed.
~Skip


For Fans Of; Neurosis, Isis, Cult of Luna