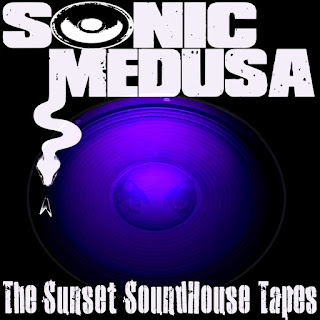 In this, Sonic Medusa's first release, seasoned veterans from The Obsessed, Goatsnake, White Zombie, Hollywood Rose, and frankly too many others to list serve up a gnarled and battered black storm of classic doom-inspired stoner rock.  The primal drumming is what makes this such an extremely enjoyable ride, along with glorious guitars that feel like coming home and a singer snarling out vicious words against a wicked underworld, all culled together to serve up an open ended mind battle of a battle of wills against ancient gods and demons.  "Cold Wind" begins with guitars akin to breaking through a brick wall, which serve to let you know you're in for a maddening ride, showing an unrelenting passion that casually leaks into "Wolf's Prayer".  These two songs give this recording a fantastic early high.
Psychedelic lovers will no doubt find a new favourite with "The Goblin Suite" as it quickly swells into a kaleidoscope of riffs and vocals that constantly expand and contract, giving a wonderfully dizzying effect to the listener.  Near-tribal drumming begins the closing track "Medusa" before churning out a powerful, triumphant sound interested in one thing - glory.  As the last riff comes to an abrupt end, you'll be left more than eager for the entire album to play again.  I'm sure our friends over at Ripple Music have already got the ball rolling on that front.
~ Richard