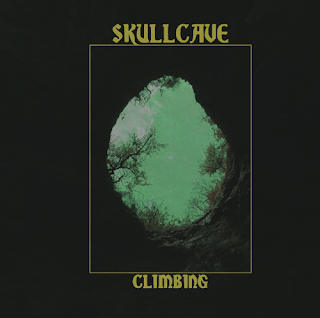 This second EP from the Australian trio of Skullcave takes doom, swirls in some grungy hooks, then gives it a stiff shot of psych-like fuzz and feedback concentration.  It all works out to something with a taste running near heavier-than-usual stoner metal, but with enough odd twists worked in to keep things unpredictable, even on repeat listenings.  The six resultant tracks pack a stormy atmosphere into their run-time, shifting neatly between bone-breaking viciousness and fuzz-brained drifting, and in the process, getting things cooked up nice for whenever they decide to pull out a full album.
And, in a nice show of structural sense, they save their wildest stuff for the last two tracks, with "(Falling)" building into "Climbing" in superb style.  Biding its time until the need for Hell to break loose arrives, this pair of songs nearly steals the whole show, but it also builds so well on the previous songs that it's hard to pull them apart.  Check this EP out, by all means, but really do yourself a favor and listen to it in full.
~ Gabriel

For Fans Of;    Alice In Chains, Lesbian, The Munsens, Snail, Wolf Blood