The Bag I'm In 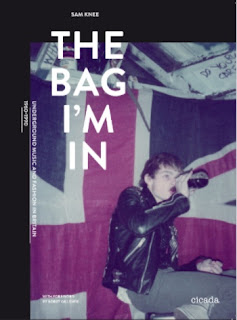 The full title is The Bag I'm In: Underground Music and Fashion in Britain 1960-1990, though for accuracy's sake, that should be amended to have 'Rock' inserted between 'Underground' and 'Music'. Among the genres receiving virtually no coverage are ska (despite a 2-Tone chapter), hip-hop, electronic (aside from a passing reference to the enormously influential Throbbing Gristle and acid raves), and metal, unmentioned until 1984 with the 'Thrash/Crossover' section. Dub, reggae, and rudeboys (none of which get their own section) are brought up peripherally a few times, but the number of photos with black Britons can be counted on one hand, and Indians seem entirely absent despite the fashion-mimicking of their regionality by the hippie and space rocker sets.

There's also some sweeping characterization made with the first line of the author's introduction: “Unique to this island, the music and fashion scenes are ingrained in the UK's DNA, going hand in hand as an inseparable force of nature that shapes our lives and the society we exist in.” Aside from the preposition at the end, there's the issue of omitting (whether by choice or simply not thinking of it) consideration of another island nation, Japan, where music culture and correspondent clothing have similar intertwining, from the punk-sworn bikers to the visual kei movement, not to mention the mainstream-abhorring experimental electronic/noise scene or the massive influx of American rock after World War II. I'll leave additional national counter-examples up to readers' discretions.

Providing brief analysis and background for each of the styles covered, along with a pertinent lyrical excerpt for each (in a nice touch, the back-to-back sections of Second Wave Punk and Goth respectively use “Punks Not Dead” and “Bela Lugosi's Dead”), the book tells its history in pictures well enough through the extensive photo illustrations, though as the author notes, size restraints limit the scope of exploration. The mod section stands tied with punk as the lengthiest, if revivals and derivatives go uncounted, though punk and its various off-shoots would otherwise easily win. One of the more interesting inclusions is hard mod, “an almost mythical, transitory sartorial style that is virtually impossible to pin down,” which spans just two photographs.

A focus on the lead-up to punk's emergence and the subsequent fallout tints most of the historical examinations, but given the impact the arrival of that genre had on music, fashion, and the UK in general, it's an understandable skewing. On the other hand, there's some odd minimizing of some aspects, such as the reduction of third-wave skinhead politicism and agitation to just two sentences. Similarly, “half-baked, shabby, second wave Gothdom” and pre-thrash metal, which the author characterizes as being marginalized to “poodle permed, Dungeons & Dragons playing sci-fi kids” during the punk era get brushed past without investigation even while recognizing their cultural subsumption. Even in light of needing to save page space, the amount of material excluded raises questions, particularly when the book's foreword identifies what did make the cut (such as Smithsmania and the '79-'81 fashions of Postcard Records) as “36 of Britain's most radical, vital underground scenes”.

The subjects of photographs are often identified by first name only, but there are a few with full name inclusions, and some of the photos have the locations identified as well, which adds an interesting sense of the regional disparities. There's some noticeable pixelization with the photos that have been blown up to larger sizes (a handful of which get double-page spreads), but the value of their inclusion (and of being able to get a closer look at some of their details) makes this easy to forgive. On a sweet note, a couple of pictures of Robert and Janet Knee, presumably the parents of the author, are included in the Campaign for Nuclear Disarmament (CND)/Beatnik and Art School Boho sections.

Some regional slang appears, and US readers may be confused by references to 'Mohican haircuts', which go by the name 'Mohawk' over here, but these turns of phrase can generally be puzzled out, and they add a nice personal flavor to the book's analytical angle. The appendix of an 'illustrated style guide' proves one of the book's most intriguing aspects, with paper-doll-style presentations and head-to-toe examinations of the fashions illustrated by Florence Bamberger offering help for quick perusals or more involved study.

The book may make you turn a fresh eye towards your own clothing choices in relation to your listening habits, past, present, and future; it may also give you an urge to visit your parents for the purpose of raiding their stored-away wardrobes. Whatever the case may be, it's an engrossing assembly of music/fashion cross-sections over three decades of the UK's history, framed and enthusiastically connected by Knee's assessments of influence. A scattering of band names and record labels adds an extra dimension of enjoyment for record-hunters, and it's fun to imagine the accompanying CD or DJ mix some enterprising individual could put together from all of the songs that get quoted along the way. All together, quite a good read, though some of its choices will have readers scratching their heads as they try to figure out the reasoning.