The Giants Of Doom Cometh... 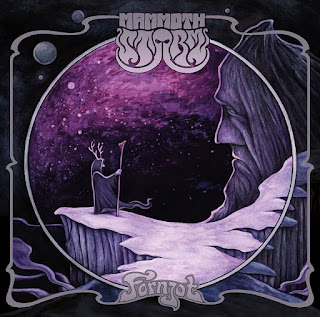 Fornjot, the first full-length effort from Swedish power trio Mammoth Storm, firmly entrenches the band as bringers of DOOM!
Released on Napalm Records, the album opener Augurs Echo is an 11-minute-plus epic that builds off a sonic landscape created by guitarist Christer Ström before being joined by the concise, heavy, delivery of Emil Ahlman’s drums, and the powerful vocals of Daniel Arvidsson; also providing brontosaurus bass lines. The track shifts between an epic, doom march to vast horizons of sound, echoing the tragedy of lonely, barren northern lands.
Sumerian Cry is a fuzz-loaded battle march, suitable for combat via helicopter or horse. The trio slowly, builds up the attack mode before firmly switching the pace back to lumbering doom on the title track. According to legend, Fornjot is a giant and ruler of Finland, Kvenland, and Gotland. The power of the giant and the bleak landscape he rules over are well amplified in Fornjot.
Mammoth Storm creates its work in layers, moving the listener through heavy realms while never stopping the story from plowing ahead. Production on Fornjot is tight to say the least. This is professional doom to the max, helping cement Mammoth Storm as major player in the realms of doom and sludge.
Out now on Napalm Records, theres a variety of formats to choose from, including three colours of limited edition wax.
~ Andy