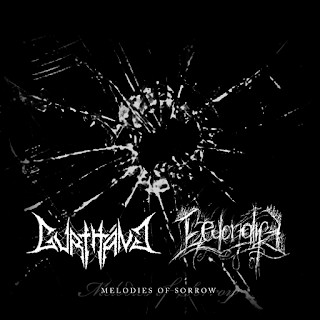 Coming from Cimmerian Shade Recordings, this split twists together doom, noise, black metal, and a dash of industrial for a very atmospheric and chilly experience.  Both bands contribute material recorded somewhere in the 2013-2014 range, but it all sounds fresh and vitalized.
Gurthang's half of this split is aggressive but weighty doom with a blackened edge, grinding through riffs while percussion pounds away.  While the black metal influence tilts the scales in its favor a few times (most strongly with "Arise"), there's a low-tuned groove rolling along under their most furious guitar-work, and the bulk of their material makes good use of the moody coldness to be found while wallowing in the low-end.
Beyond Life take their side in similar directions, though they spin a denser cocoon of synth drones and incidental noises, with a near-buried voice intoning a litany of despair.  Starting with "Heavy Rain", creaking mechanical rhythms coupled with the inspired squeals of guitar give things a feel not unlike being strapped to a conveyor belt headed for a factory's furnace.  "The Burial Rite" turns, appropriately, to a more funeral doom style, and "Driven by Melancholy" closes out the album with a keening and thoroughly forlorn arrangement of subdued strings.
Both groups bring a strong sense of their character to bear in their contributed pieces, and it all goes quite well with cold weather, particularly if you've got some frost building up on your windows.  So far, the label's announced no plans for a vinyl release (just CD and digital files), but it's still worth putting your hands on a copy if you enjoy funeral doom with some aggression and experimentation.
~ Gabriel