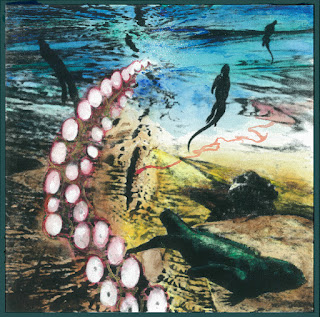 Nauseahtake's debut album, Laws Of Multiversal Gravitation, beckons its listeners in with an eerie sound sample played over a didgeridoo drone.  Plenty of bands have started off their albums in such a way, but Amsterdam's Nauseahtake actually offer a really fresh, interesting take on the genres they tackle.  The influences on this album are clearly wide-reaching and the scope of the band's ambition is impressive.   At various times in the 25 minute opening song, “The Crust”, I'm reminded of Amon Duul II and Hawkwind.   Further into the song, they take on a more overtly metal sound, with crushing riffs and relentless drumming delivered with real gusto and aggression when needed, while at other times, the band can create a sound delivered with calculated understatement and sinister power.
Laws Of Multiversal Gravitation definitely gets very heavy at times, but quite often I'm reminded more of classic psychedelic heavy rock than anything too doomy in the classic sense of the word, not that that's any bad thing.  Nauseahtake rock out when they need to but also know when it's best not to be too heavy.  That understanding of subtlety is not something too many bands have a decent grasp on, so it's refreshing to hear a band this accomplished at both real heaviness and lighter, more atmospheric sections.
The ambition shown in these three tracks is really impressive.  While many heavy bands are happy to simply repeat a couple of choice riffs for half an hour and call it a song (not that there's anything wrong with that), Nauseahtake have an almost proggy take on long form songs, with the album's three songs all taking on multiple parts with different moods and influences.  Listening to songs as long as these can often feel like an undertaking you don't want to commit to too often.  However, the variety shown on these three songs means that the album is actually reasonably accessible and enjoyable from the very first listen, though it's certainly the sort of album that you'll want to play a few times to get the full effect.
This album is enjoyable all the way through and generally a well-executed and original take on heavy music that blends together a lot of different influences into a surprisingly coherent whole.  Definitely recommended for anyone interested in original music that really rocks out.
~ Martin