Calling Forth The Demon of Smoke... 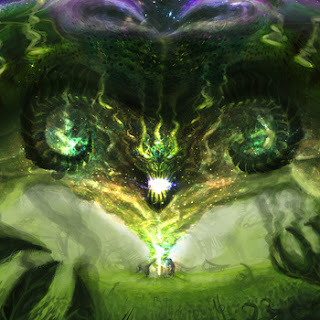 First things first when giving Tempter a listen: the band is a juggernaut blurring the lines between metal, groove and stoner rock. It is important to keep all of this in mind because Tempter has recently unleashed their debut EP upon the world and I'm not sure it is ready to handle such a masterful miss-mash of music that hits hard and rattles some bones.
Wasting little time getting to break-neck riffs backed with coarse (yet surprisingly fluid) vocals, Tempter flexes their metal muscles first with opener "Barbarus," a crushing tune reminiscent of late 90's nu-metal with a hint of Rage Against The Machine via neck-traveling, sweeping solos. Never truly losing that "heavy" feeling throughout the album, Tempter does display calmer moments and segues that call to mind much funkier elements (think Clutch) that transform the full speed tempo of most songs into a head-bobbng, shoe-gazing trip. The album's drumming is also a major highlight given the incredibly clean sound and speed variations. At the drop of a hat, the album's percussions switch from a wreck of smashes and clashes to quick hits and high-hat rides that play perfectly with the rest of the record's ever-changing style.
Channeling a love for stoner culture, Tempter appear to have a clear vision of where they are headed in today's scene. Playing with both a sense of seriousness and playfulness, the band knows how to shred and keep the mood only as dark as they feel; a strong sense of control over the music they are creating, which often times can be a daunting task in a world that blends genres and flips trends every hour. Hopefully the band will find its footing in its native Mexico and hurriedly travel to the U.S., where I believe their sound would truly catch on with many metal/stoner connoisseurs.
~Joe

For Fans Of; Amebix, Helmet, Karma To Burn, High On Fire

The Summon (name your price)