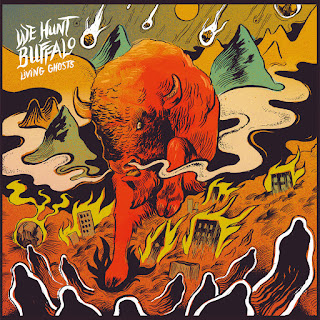 After building a reputation with their first two efforts, Fuzzorama Records picked up the Canadian stoner rock band We Hunt Buffalo for their latest full length "Living Ghosts". If you've been following them for any length of time, then you pretty well know to expect excellence across the board. For the newcomers, expect world class stoner rock with a melodic, almost atmospheric edge at times. Leading off with swinging rock tracks like "Prairie Oyster", slamming, fuzzed out guitar riffs that will get your head banging. The further you dig into the album though, the more mellow qualities come out, offering up a lighter take on what stoner rock can be with tracks like "Fear", where the emphasis is more on vibe and tone than using brute force to get their point across. These guys will be another stand out in a year already packed with excellent releases. Even though the album has been out a couple weeks, there are still physical copies to be had over at the Fuzzorama Records site, grab the digital version from bandcamp.
~Skip


For Fans Of; Bask, Greenleaf, Arenna