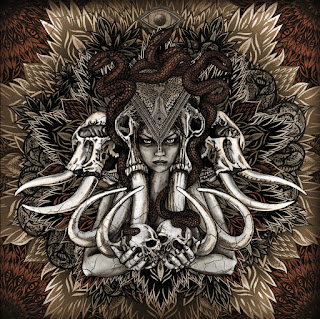 Pairing sludgy vocals, attitude, and rhythmic style with doom metal grounding in bass and guitar riffs, Grim Van Doom's latest release (their first full album) doesn't do much to explore new territory, but they play with enough earnestness and commitment to the style to earn some respect points.  Some nice mixing and production helps bring the metal into sharper focus, and the vocalist's grunts and howls have enough belt behind them to fit with the music instead of going overboard or getting over-powered by the instruments.
The biggest issue with the songs (as I heard it, at least) is that they're too compacted and organized for the vivacity of memorable sludge to really come through.  The antagonism with which they start the album is the level at which the end it, and they never really get to be let off of the leash, so to speak.  While that might make for a reliable experience for fans of the band who just want to dig into more of the same, it doesn't seem like it will do much to draw in people coming across the band for the first time.  More than decent performances across the board, but so far, it feels like they could stand to give the core melodies a little more room to breathe between hammering down with drums.  Still, they hit some good grooves and show some promise for future developments, so if you're down with the doom sludge, you might wanna check these guys out.  Copies are available on vinyl (161 marbled red & black copies, 372 on standard black), CD (1000 copy run, patch and poster included), and cassette (100 copy run, white shells) as part of a three-way effort by Wooaaargh Records, Aural Attack, and Vinylaceton, with digital downloads from Grim Van Doom's BandCamp page.
~ Gabriel