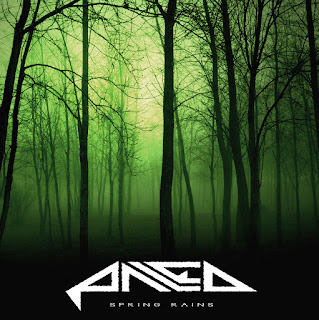 Following up on their debut EP from last year, the Austin-based crew of Paleo are back again to deliver some mellow stoner rock refreshment in the form of this new EP.  Meandering melodies and heaviness loaded in where it's needed give the music plenty of bite, and as they go for an instrumental groove throughout the EP, it's easy to get picked up in the tow of their enthusiastic riffing.
An interesting flange effect on the guitar of the opening title track continues with the following tracks, though in most of these it doesn't have such a pronounced presence.  In their heavier cruises ("Herpules", for instance) they get a heavy grinding weight going on, to very nice effect, though they're careful not to let the trick wear out its novelty, thankfully.  In other places (e.g., "Nameless Cave"), there's a switch to building up atmosphere, to make the big slams like "Tale of Hell Creek" hit all the harder.  It all makes for a strong EP with lots of neat nooks and crannies to get lost in and return to every time you get hungry for more of Paleo's spread.  In short, if deep and heavy grooves are what you crave, give this band a go.
~ Gabriel