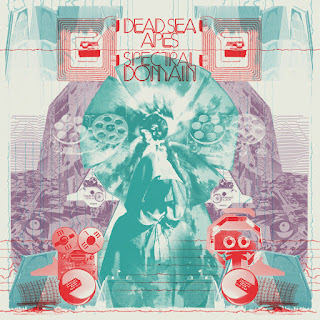 Hitting their third album with this release, the Manchester-based squad of Dead Sea Apes cruises through a heavy psych storm with enough control to keep it rooted to interesting material, and enough looseness that you'll have little idea where they're headed next.  From the dead night highway sounds of "Universal Interrogator" at the start of the album, all the way through to "Sixth Side of the Pentagon", Dead Sea Apes maintain a shifting wash of sounds called up from their strings, pedals, and drum-kit, varying the experimentation while keeping solid grooves going.  It hits the 'dunk your head in this and see how you feel' sort of metallic heavy psych extremely well, and you can tell that they're having a good time with the material (although practice for getting the spacy rhythms together just right could easily have seen some wear on the nerves).  All around, damn good stuff, and a strong contender for this year's Top 20.
~ Gabriel