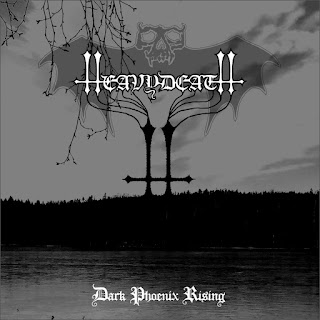 Heavydeath's latest offering (as of this review's writing, at least; give 'em another two months and they'll probably have another one out) is Dark Phoenix Rising, a ~40-minute pack of five songs done in Heavydeath's heavy & deathly style.  Strong riffs, big recording acoustics, powerful bass presence, and bone-thumping drums are the focus here, though there's also some sparingly-used deep growls worked in to good effect.  The band takes the music seriously while still finding some fun with surprisingly psych-y stretchings of the riffs, and you should be prepared for those lengthy rides, as the first two songs each take ten minutes to get their point across, building up walls of sound that will push your pulse higher before you realize it.
If you're in the mood for it, that sustained tone-soaking can be a damn nice dip.  Although they do get into it with "The Ember of the End", if you want something with the persistent speed of thrash or typical death metal to it, you'll want to look elsewhere.  Assuming you are down with high aggression at slow speeds, Heavydeath have you thoroughly covered, and while the title track, doubling as the closer, is only four minutes (a real quickie after everything else), it blends the elements of the other songs together in an effective coda of hot-blooded doom.  Another very solid release from Heavydeath, the last of the tape run inventory from Caligari Records is quickly headed towards unavailable, so jump on it if you need a physical copy, or snag a digital one from HD's BandCamp.
~ Gabriel