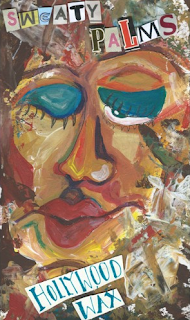 This new EP, presumably the debut from this Glasgow-based band, goes for surfy garage rock with a dark sheen, a little bit like a slowed-down Ramones record.  Touches like tambourine and background howling make for an odd dog, but there's a sense of fun throughout the four tracks, and the playing is casually cool enough to slip into your memory and hang out until you've got to hear it again just to get the melodies and attitude in full.  One of the stand-out tracks is "The Tube", which eschews standard singing and structure for an amorphous song that bubbles along.  Since it looks like Sweaty Palms' BandCamp page has expired, you'll want to head over to Fuzzkill Records' SoundCloud to check this crew out.
~ Gabriel