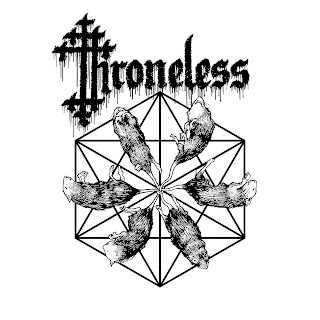 Making their debut with this album and its four big tracks, Throneless enter with bassed-out, lumbering monsters which play well to the stoner doom standards, whether slow-rolling along or moving at a faster clip.  There's a surprising amount of energy sunk into the tarry pits of the songs, which are spaced and paced just right for the vinyl release.  Aside from the energy levels, there's not too much change-up to be heard from track to track, but they commit themselves well to the task of delving into bass resonance and stretched-out riffs.
It's one of those debut albums which sets the stage for future expectations, instead of trying to reinvent the wheel first go.  As far as helping the band get their legs steady, it does a passable job, but the real treats are when they crank things up to a hotter and faster fury.  With Heavy Psych Sounds handling the release, fans of extended heavy doom groaning with some subtle psych touches will do well to give an ear to this group.
~ Gabriel

For Fans Of;    Ladybird, The Munsens, Sleep, Windhand, Wizard Smoke

Throneless - Masters of Nothing (320 kbps)