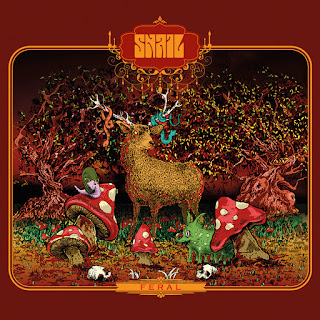 Originally formed in 1992 but disbanded the following year, Snail reincarnated in 2008 and has been crawling steadily along since then.  Feral marks their fourth album, and with its eight songs, Snail show off a tangled web of fuzz, stoned-out riffs, relaxed grunginess, and heavy-loaded momentum.  Brash energy and a cheeky sense of humor run under the surface of the music, adding liveliness to the tracks beyond the clattering drums and reverbed strings, subdued enough to enhance what's already working instead of trying to override it.  When they do switch into high gear, Snail rocket along on a sooty trail of stardust and amplifier endangerment, pulling your ears along in the wake.
While there's some mellow head-space explorations tucked away in the album's run, they never fully lose the momentum carried from the more manic tracks, but channel it into a quiet intensity that might carry even more punch with its focus.  The melodies are catchy without getting poppy, there's good flow from track to track while keeping things varied, and the songs are hypnotic enough to keep some surprises in store for multiple listenings, so fans of fun heavy psych should do themselves a favor and check this one out.  Small Stone Records has CD copies available, though unfortunately the vinyl version sold out during pre-orders; hopefully they'll take that as enough of a sign of interest to do a second run in the near future.
~ Gabriel