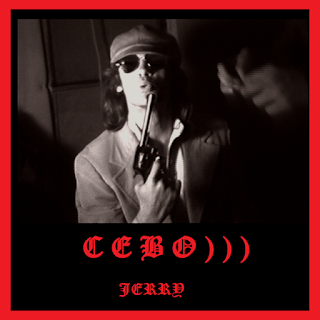 Built around "the life of hit songwriter/bank robber Jerry McGill (a.k.a. Curtis Buck)", this three-track debut EP from Cebo (or CEBO))), as it appears on some of the artwork) is a quick quarter-hour affair trading in melodic sludge with a sprinkling of samples for extra flavor.  There's also some blues in the mix, with inspiration taken from R.L. Burnside and Memphis Slim for a couple of tunes, making for an extra uncommon blend.
While there's an emphasis on the instrumental side of the music, the vocals are no slouch when they get put to use, working a low gurgling growl (with a flange or phaser effect in a couple of spots) against the slow-beat drums and thick-buzzed strings.  Giving itself over pretty fully to the grooves, the music hits a thick, swampy atmosphere with style while keeping a mean edge present.  The narrative may be consumed past the point of recognizability by the style, but there's still a strong energy carrying things forward.  All around, a respectable first effort, worth checking in on for fans of honest sludge.
~ Gabriel