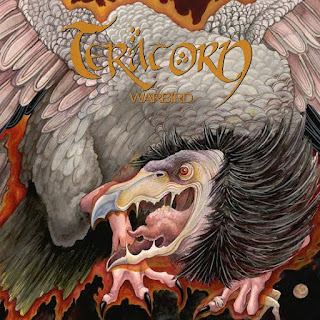 After their well received first effort, Teratorn are back this time with a debut full length record called "Warbird". Melding stoner rock grooves with the heaviness and crushing melodies of doom metal, you even have a little of that grittiness that's so loved in sludge  working its way into the gears of the machine at times. The entire album has a gigantic feel to it, like the difference between looking at a mountain range on the horizon, instead of just a mountain. Having heard the band play the album's title track a while back, I had an idea of what to expect going into it. I was thoroughly impressed when I got to hear the entire record though, because as good as it is, the title track is just the tip of the iceberg. Go a few track past "Warbird" and you'll find yourself at the start of a song called "Marauder", it kicks off a slightly southern tinged stoner rock riff. It doesn't take long for the clean, melodic vocals to kick in and take things over, offering up a nice contrast to the rather crunchy guitar tones on this one, even in the spots where there are some guttural backing vocals. "Marauder" has a couple of different sections by the time it winds down, from hammering sections that drive forward, to the more open and lighter ones that are underpinned with some stoner rock vibes. With that kind of variation, fans of just about any heavy music should find something to like when this album is finally released at the end of the month. There are two tracks up for streaming on bandcamp for you to check out right now though.
~Skip


For Fans Of; Baroness, Half Gramme of Soma, Shellfin