Demons from the Dungeon Dimension - As the Crow Flies (2016) 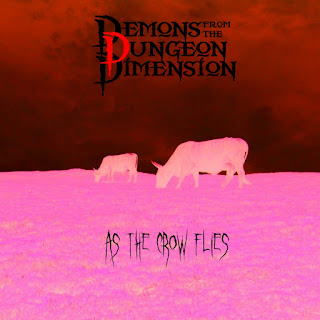 Coming to us from South Africa, this debut from the Demons from the Dungeon Dimension (DftDD, or DDD, or D3, or 3D... so many options for getting around writing out that name in full!) offers what's become a relatively rare commodity these days: metal from an environment where it's still considered to be a threat to society.  Fittingly, there's more than a little of the retro heavy metal flavor to DDD's sounds, though they avoid whole-sale imitation in favor of blending it into their raw doom base.  As you might also expect of music coming from a context of no social support for what the musicians are doing, it's self-produced, though aside from some fuzz and a little persistent feedback, this doesn't cause any real issues (and the hatred doomsters have for fuzz is well-documented, right?).
Finding comparisons for the group's style is tough, as they casually move between heavy rock and metal barbs without telegraphing it, keeping afloat on thick grooves while weaving atmosphere to fit, but it does feel like they've carefully studied a wide number of bands to bring their own style into being.  Chunks of blues, flashes of death, and smears of grungy alt rock all bubble up from the heavy doom base, and hearing the way they roll it all together in a way that holds together (even while manifesting some odd shapes) is a big part of the fun of the album, at least in my listening.
The band already has a new EP out (I guess it's technically a single, but one that comes to about 24 minutes of music), so if you want to hear a new band applying some creativity and musical knowledge beyond doom dogmatism, you might want to grab the downloads for this and that from D3's BandCamp page.  And hey, why not throw them some money for it, to let them know they've got an interested audience paying attention out in the world?
~ Gabriel