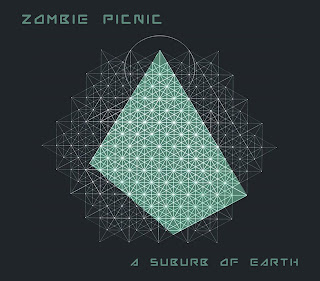 This album is the debut release from the Irish quartet of Zombie Picnic, and with the four instrumental tracks they show-case on it, the band sets quite a high standard for future releases.  Playing in an energetic and free-spirited prog rock style, the group draw in influences from too many styles to list, swirling them about in a kaleidoscopic mixture that manages to keep rocking hard while flying around.
There's a cool jazziness to the mellower sections, something which the drummer holds onto throughout the faster smashers, while the strings slide from chilled noodling into wild bashers with a dazzling fluidity as a selection of samples provide the only vocals to be heard.  Pedal effects are used with enough restraint that they enhance the powerful playing without stealing focus from it, grooves are examined thoroughly without wearing them thin, and the heaviness they dive into from time to time shows that the band knows their way around it too well to be considered just visitors.
The unchained nature of the song-writing means that these songs are best listened to without expectations, at least initially, so that you can follow on with the ride and not get thrown too hard by the abrupt rhythm changes.  An first-run pressing of 100 CDs are being sold through Zombie Picnic's BandCamp page, so grab yourself one of those (or a digital copy) if you dig on complex, creative, lively, and good-humored rock that knows no bounds.  Massive respect to this group for what they've done with this first release, and I really can't wait to hear what they'll pull together for their next one.
~ Gabriel