Somewhere Out In Space... 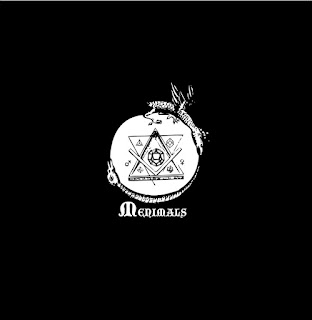 In my reviews, I often talk about how vital it is for bands to bring something new to the table with their music - or at least, put their own spin on old ideas.  Of all the albums I've reviewed for The Burning Beard, I've never come across one that truly creates its own unique musical climate quite like Menimals' self-titled album.  Hailing from Italy, Menimals craft a hazy, hypnotic musical waft of smoke that invokes psych, jazz and raga more than doom or heavy rock.
"In This Unforgiving Heat" opens the album with subtly undulating double bass and restrained, workmanlike drums that tether a dreamy lead wind instrument from flying off into space.  "Dodecahedrum, The Window Sphere" brings rasping, half-sung, half-intoned vocals into the mix.  The song's tempo ebbs and flows throughout the track, and everything adds together to create a truly atmospheric and engaging song.
With "Tetrahedron", Menimals finally let themselves go and explode off into the ether with a seven-minute epic that is simultaneously memorable and involving, whilst still being subtle enough to wash over the listener in waves.  With this self-titled debut, Menimals have crafted an album that takes influence from jazz, avant-garde rock, and even ambient music to create a record that has a place in avant-garde lineage - despite largely eschewing influence in favour of genuine individuality.  The album, by virtue of its sheer uniquity, is not for everyone.  However, it is an album that earns a hearty recommendation from me for its sheer originality.
~ Martin

Menimals - In This Unforgiving Heat (320kbps)