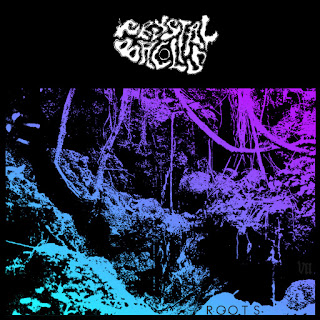 With this two-track first release, which hit the world on April 20th (presumably at 4:20 p.m.) for maximum stoner cred, the Floridian group of Crystal Balls specialize in dirty grooves, vocals that sound like bong-water was gargled to prep for the recording session, and bass that stretches out with no worries.  It makes for a mix that some (like me) might describe as 'blackened stoner doom', but the emphasis is certainly on the stoner doom half of that mix, breaking up the usual zonked-out slowness of that style with frenetic bursts of raw beatings before slipping back into reverb adoration and focus on string tones.
It's an uncommon mix, but certainly an enjoyable one, as long as the rough vocals don't immediately turn you off.  The group shows a deft hand at drawing out and gradually twisting their melodies, with each of the lengthy tracks easily avoiding repetition for its own sake, and instead keeping things lively and engaging (though not so wild as to lose the already red-eyed listeners).  Since it runs just about 21 minutes between the two songs, you'll need to listen to it twice to hit the magic number, but that'll let you pick up on some details and technique you might have missed your first time through, so it's all good.  Definitely check this one out if you can dig some violent tendencies with your stoner doom, and stay tuned for more from this crew.
~ Gabriel