Grown From The Unknown... 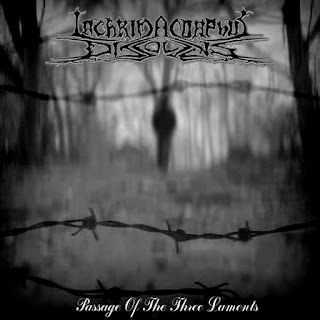 Here we have the latest album from Lachrima Corphus Dissolvens, which in case you haven't heard of them before, is a band from Bolivia which has been producing metal of the death/doom variety since 2003.  With Passage of the Three Laments (apparently an expansion/follow-up to 2010's Bin of the Three Laments), the group shares over an hour's worth of material to life in morbid atmosphere, managing to bring together moments of dramatic theatrics (e.g., the sounds of weeping children, the rumble of thunder, and piano progressions built around letting one note ring out at a time) with more fierce outpourings (howls, guitar shredding, hard and heavy drumming) and have it feel like a natural union, unhurried and paced in ways that play to the strengths of each side.
From that, there's a strong sense of thought going into the album's assembly even before the actual song-writing began.  It feels like a story being told with care, the different moods of the songs acting as environmental set-pieces to further illustrate the narrative while providing a dark richness for the ears.  I feel like I'm fumbling more than slightly to put it into words, as the group achieves a cinematic quality which most bands don't even seem to consider tackling, and LCD do it so damn well.
On top of that, there's the range of styles that the group meshes together, keeping the morbid mood alive through neofolk-like acoustic guitar strumming, the numerous atmospheric interludes, the vibrant turns into unrestrained metal, the genuinely epic size and ambition matched by production to make things sound as though they're taking place in a cathedral, the woods, a tomb...  It's all of this and more.
Just fantastic, all told, though thankfully there's enough substance to the album that it doesn't compromise itself for instant accessibility.  Not one to put on in the background (at least not for the first few times you hear it), but instead, something that should be given concentration to appreciate how much work went into making the songs what they are.  Expect to see this one in the single-digits ranks of my 'year's best' list, and please, if you enjoy doom that can take things seriously, take the time to hear this one for yourself.  Also, here's hoping that Forcefield Records or some other excellent label picks this up for wider distribution and a vinyl pressing.
~ Gabriel