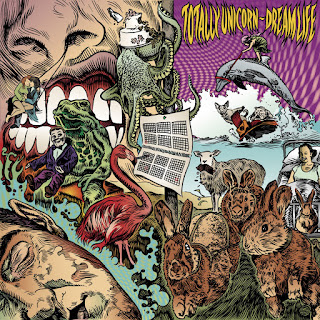 Sometimes we all love a little something thats a bit discordant and out there. My personal vice when it comes to weird and wonderful finds is Australia's own Totally Unicorn.
Brought to my attention by an Aussie friend of mine while I was Thailand, I was shown the video for their song Cool Dads With Cool Sons while sat next to an elephant, in blazing heat drinking my 8th bottle of Chang. I know those details aren't entirely required, but when you watch the video it really helps paint the picture of what a surreal predicament I was in.
I will prefix this whole thing by stating that I'm not a massive hardcore fan. Whether it's the overly pretentious band members or the often discordant nature of the music, I don't know. I've never quite been able to put my finger on it. That being said, this is where Totally Unicorn stand a good few paces from that particular crowd. If you viewed even so much as 10 seconds of the video above this will already be brazenly apparent to you. If you've yet to, well maybe such song titles as "Umm, Yeah We're The Gay Metallica" and "Let's Spice Things Up With Laser Swords" gave it away?... Or maybe the fact that they released an EP called 9inches and pressed the vinyl in the shape of a dick (yeah, it totally looks as awesome as it sounds). Either way, it's safe to say that Totally Unicorn as about as far away from the conventional straight edge hardcore scene as it's possible to be without dabbling in acoustic folk music. Although I wouldn't put it past them. Still, it's a damn good refreshing change to find a band that don't even contemplate taking themselves remotely seriously. While listening to the music alone doesn't instantly convey this image, in typical Aussie style the guys certainly have fun at the top of their agenda. Yeah, not all of you are going to dig it, but I defy any of you to say that you wouldn't want to catch these chaps live or be at a house party with them. I can just picture it now... Them rocking up to the front door with a crate under each arm, before you later discover that one of them has buttered the cat, another shat in the washing machine and that they've superglued their latest album into the cd player.
The only trouble with Totally Unicorn is the fact they're damn hard to describe, other than that they're the musical equivalent of Marmite, you're either going to love them or hate them (apologies if that analogy gets somewhat lost in translation). It's tongue in cheek hardcore essentially, but you really should go and check them out and make you're own damn mind up.
Dream Life is out later this week and although it may not be in the shape of a giant phallic, this new release will still be an absolute belter. Head on over to their bandcamp and check out some of the preorder bundles on offer!
Go on, go!
~ Jay


For Fans Of; Nasum, Cult Of Luna, Sourvein, Swarm Of Spheres, Gay Paris