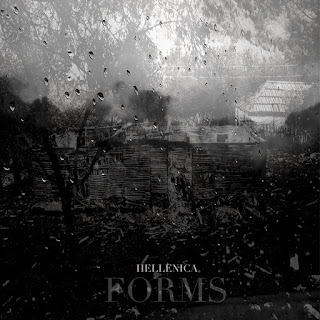 Our last encounter with the Canadian one-man band of Hellenica came in 2014, with the cassette release of Blood Moon Wolf Head.  On that album, Hellenica's western-inspired melodies and post-rock blues drew me into the atmosphere of the experience,
With Forms, Hellenica is taking a different approach to setting, titling each of the five tracks with latitude-longitude coordinates.  Musically, things start off by taking more of a subtle turn, with synthesizer and applied effects rendering some not-quite-ambient textures before the strings work their way into the patterns.  The combinations make for some brooding, semi-hypnotic arrangements, calming and yet unsettling at the same time.  The production, thankfully, plays up the strengths of the compositions, giving the sounds acoustic room to breathe, keeping them crisp and clear, and polishing the edges to a fine shine.
As the tracks stretch out in their undulating rhythms and cooled tones, the tension and activity build along with them, with echoing resonance and singular notes striking out in distinction.  Recommended if you could use something to help focus your mind, to have a deep stretch of music to let yourself sink into, to study long-form semi-procedural music composition, or if you just feel like having a break from regular rhythmes and persistent percussion.
~ Gabriel