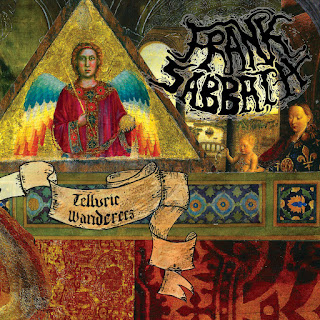 I first heard this album, in a somewhat different form, back in February, while the band was searching for a label to release it.  Happily, they've since reached an agreement with Argonauta Records, so now it's available to the public at large.  This French group of psych doom rockers (whose first album we reviewed back in November) was a surprising blend of various styles, so expectations were high and open for this one, and it certainly delivered.  Listening to its updated and polished-up official form is another treat, as three extra songs have been packed in to lengthen the fun.
Starting off with a crisp roll of the drums right into a fuzzy growl of bass and guitar in the "Ascension" intro, Frank Sabbath quickly show that they've still got the hooks and funky grooves intact this time around.  After laying the foundational work down, they proceed into the quarter-hour exploration of "Subterranean", bringing in heavier and darker tones to fit the track title.  A thick atmosphere of pressure and gloom takes hold, making for a drastic change from the generally sunny psych of the self-titled album, but they certainly handle it well, especially with the driving ramp-up of feedback intensity.
After finishing that trip, it's on into the warmer environs of "Terra Incognita" and the superbly chunky "Inner Doom - Outer Doom", pieces which find the band bringing in some of their jammier energy while keeping things structured enough to sway listeners along with the rhythms and heated riffs.  This is where, in the demo cut, "Ducks on Drugs" closed the album out with a warbling use of distortion to have listeners checking their speakers' vital signs, spiraling out to a drop-off that nicely escorts the music out the door.  Now, though, it's been joined into the "Inner/Outer Doom" for one big slice of heavy psych.
From there, we hit the new pieces, including "Interlude n10", a quick and jaunty piece, then "Flying Peacock", a fizzy groove of fuzz and warm tones, then finally a big'un for the finish, "Doumedilalune - Noisnecsa".  This ~10-minute closer kicks the bass presence back up with extensive sweet riffing on the main melody line, mighty growls from the strings, and tight rhythms throughout.
All together, it's an excellent album, and one that's been nicely treated with this long-awaited release.  The band shows plenty of growth in style, song-writing, and working together, and while their sprawling list of influences can still be heard, they've tightened up the presentation considerably.  Keep your ears open for more from this fantastic band, and if you haven't already heard the first album, now would be a good time to fix that.  Hell, throw them on one after another (with their Orange Sunnshine jam pack as a spacer, if you want) and have yourself a great stony time.
~ Gabriel