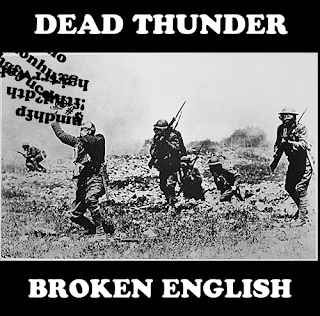 Picking this one out for review was a tough call, because (as the sharper-eyed among you will have already noticed) it came out back in 2012.  But the guys behind this music seemed so earnest, and the mix of styles so tempting, that I decided 'Hell with it,' and slapped it on to play.  To give a little more background, Dead Thunder are a pair of brothers from Illinois, doing their music with guitar and a drum-set, using stylistic elements drawn from stoner rock, doom metal, psychedelic, noise, and several other groupings.  On top of that, all four songs on this release are improvised, making their grooves that much more impressive.
On first listen, what'll probably grab your attention, aside from the gnarly guitar tone, is the rhythms the two members play through together.  Spinning up tangled beats, slickly diving into a smooth break-down, and collecting themselves for another go through the weird poundings is something you'll hear a fair amount of on the album, along with some tasty riffs that tend to last just long enough to pull you in before switching it up with another one.
Though it's billed as an EP, the release has 40 minutes of tunes to it, so newcomers will have plenty of material to check out while getting used to the band's style.  And while it doesn't have the production values of a major-label release, I'd urge all fans of creative heavy psych to check this out for themselves and get a sense of how talented this pair of brothers is.
~ Gabriel