A Heavy Project To Steal Hearts... 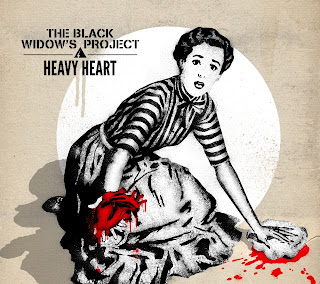 Oh, how many competitors there have been already for best album of 2013! But these fuckers right here steal the show, Heavy Heart is definitely gonna be ranking very high in my list of this year, and the year hasn't half passed yet. There, I basically spoiled the review already, but be that as it may, this album deserves it.
Heavy Heart is The Black Widow's Project debut, following their 2010 EP 'Benefit Of The Doubt' (which is, if you ask me, a great name for a debut EP!). That great naming of things hasn't been continued however, Heavy Heart isn't quite one of the most original things I've heard, and many songs on it have lyrical themes (Got The Devil, We Have To Be Free, Love's A Weapon etc.) which are beginning turn turn quite stale on me (don't ask me for a band that doesn't do that, I really wouldn't be able to name one this instant). And that's where The Black Widow's Project's greatest flaws lie right now: originality. The songs themes are, as are some of the songs' structures, done quite a few times. But the sound! TBWP do know how to deliver, they really are getting to having a very own sound, and one that knows to tickle my eardrums in all the right places at that! Fuzzy, catchy grooves hitting hard, torturing my speakers and pleasing my ears! If only I weren't hungover, that would make this delight even more delightful, but hey, I can't go blaming the band for that.

I've never been more sincere in saying I'm very interested to see where this band is going in years to come. If these guys get to developing their own sound some more and dare stepping into experimentation some more, they're gonna make some really memorable tunes! Fingers crossed!
~Ruben

For Fans Of; The Heavy Eyes, Graveyard, Kadavar, Cowboys & Aliens