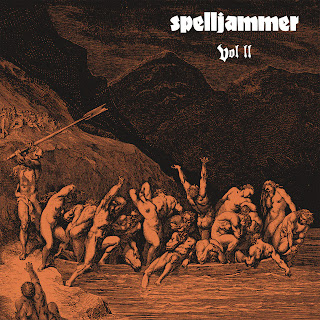 Sweden's Spelljammer actually released this, their follow up to their first album Inches From The Sun, back at the start of 2012. I actually did stumbled upon it over bandcamp a few months later, but for one reason or another never really got around to giving it the full appreciation it deserved and it somewhat languished within the depths of my iTunes. But anyway, roll forward another 12 months or so and our good friend Steve at STB Records drops me a line to say he's putting it out on vinyl. But not just any old, half-arsed, bog standard press, oh no. This little baby will be a limited run, a fraction of which will be diehard presses to which he has big ideas for the the packaging. Since then he's teased me with ideas, the layout plan and pictures. So there, that's why I'm currently so excited.
True be told, it really is about time this almost perfect example of stoner doom was given the old wax treatment. Every churning chord, slow bass lick and cymbal crash just yurns to be picked up through a needle and expelled through the soft warm tenor of a vintage amp. Much like Sleep's Holy Mountain or Elder's Dead Roots Stirring, it will just sound so much more authentic and at home spinning on your turntable. But the comparison to the aforementioned albums doesn't end there. Vol. II shares that distinct quality of not only being able to expel a pitch perfect down tuned personification of classic stoner doom but also deliver a real dulcet contrast at the same time. Maybe not quite in the same quantity as the aforementioned, but quality wise they certainly stand shoulder to shoulder with the best. Even within the vast amounts of vocal-less, thunderous, guitar heavy churning's, everything still feels smooth and tight as hell, and lets face it, thats how we all like it. Whats more, for something that is so quintessentially doom, it manages to completely avoid getting itself entirely bogged down in its own roots. By which I mean it doesn't try and be too slow for its own good. Don't get my wrong, a slow tempo is obviously necessary when it comes to the genre, but sometimes, just sometimes, when some key element is missing (or played badly) it just ends up becoming frustratingly boring... or drone (which admittedly is one of the reasons I struggle to get along with that genre as a whole). I know not everyone shares that view, but I just like something to happen in the music I listen to, and thats exactly where Spelljammer have succeeded and successfully dodged a bullet. With a tactful use of samples, blissfully echoing vocals and a Sabbath like flourish you're left wanting more instead of twiddling your thumbs. In keeping with the genre each track pushes towards the old 10 minute mark effortlessly. Flowing and crashing upon your ears like a huge tidal waves of dark and hypnotic hymns, occasionally bookended or separated with some beautifully melodic breakdowns that just ooze pure old school psych. If you like your stoner doom at a nice pace and chock full of groove then this will be right up your street, and if you're a vinyl junkie too, then holy crap you're in for a treat...
Our pal Steve has been working his nuts off to get together this record in beautiful limited pressing of just 250. 175 of which will be the (inappropriately named) 'standard' edition, consisting of black vinyl, poster insert and gatefold cover printed on the reverse side of the card for a raw effect. The real kicker though is the packaging for the diehard version, which includes the regular press, but is housed inside a killer hand numbered silver mirricard cover with alternate artwork. Then delivered to you inside another silver, hand screen printed bag.
These will go quick. Really bloody quick. So hit up the link below and part with a few bucks while you can! They go live in the store at 2pm GMT, so providing you we're proactive and followed this link straight away then took about five minutes to look it over they should be waiting in the store for you, right... about... now!
~ Jay