Throne To The Lions... 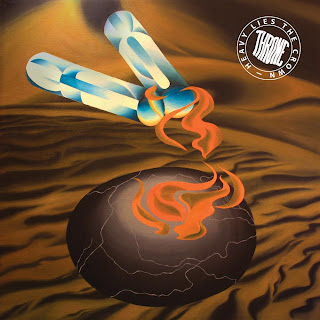 Since getting the site on Instagram (Yeah, I know a ton of you just cringed at that, but hear me out) we've discovered and subsequently been discovered by, some really great bands. These guys, and gal, being at the head of the queue...
Born in east London, the trio first got together in the summer of 2011 began gigging that October then released this, their first EP the following December. Thats a bit of a gap between conception to first release but holy crap have they spent that time wisely! I've gotta say, right from the outset, that there is just one thing that drives me mad about this recording, and thats the fact that its only three goddamn tracks! It's truly driving me mad now that even though they're poised to hit the studio soon, it's gonna be early next year until I'm able to bask in the rays of a full album. Yeah I maybe placing all my chips solely on the few tracks provided, but I'll be damned if this trio don't show a huge bucket load of potential. Kind of spanning the bridge between the garage rock sound of Uncle Acid or my beloved Moon Curse and the modern yet retro feel of say, Orchid, Throne offer up a mid tempo underground cult like sound. Rocking groove heavy guitar licks in and out of a perfect fuzz of bass and drums then topping it off with a big slice of distantly spooky vocals hits the nail squarely on the head. Not only captivating you within the very first riff, but holding you firmly for the durration. I dunno about you but thats something I find kinda hard to attain most of the time. I often find my attention wondering then I wind up missing or blanking over big chunks of the track. Maybe I just have ADD. Either way, Throne have something. A certain chemistry that makes them click and retain the ability to keep it simple yet so brilliantly layered at the same time. They have all the right elements to be able to hold their own against all the big hitters currently doing the rounds. Whats more, I reckon they could give them all a damn good run for their money too boot. I've listened to this EP on repeat for the last hour or so and its not just left me yearning for more, but absolutely determined to catch them live, preferably in the very near future. But if thats not much of an option for you, then I suggest you hit up their Facebook page and keep a hell of a close eye on them because if the full length album is anything along the same lines as this you'll kick yourself if you miss out!
~ Jay