Desert Rock From The Tundra... 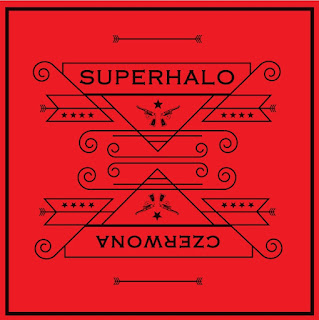 That Eastern Europe is picking up a genre called desert rock may not really have much logic to the way it sounds, as I can hardly picture an environment less desertish, but I'm glad they do. Superhalo is a Polish band formed just in 2010 (I think, their bio is in Polish and as Google Translate makes nearly as much sense of it as my own knowledge of Polish makes of it, so I'm not entirely sure) but they've already opened for and played with bands such as Triggerfinger and Stoned Jesus. Which is awesome.
The fact is even more awesome that, when I first listened to Superhalo, I thought their sound was kind of like a mix between the psychedelic and stoner elements of Stoned Jesus and the melodic elements of Triggerfinger. Sure, most of their songs are in a faster pace than Stoned Jesus, and they're not as poppy as Triggerfinger's, but the similarities are there. Czerwona isn't a completely spaced out psychedelic record, but it definitely has psychedelic elements incorporated in it's desert rock. And as far as the melodic element goes; it must be one of the best I've heard in the desert rock scene. Now I must say, there aren't many bands that in my opinion really have tried to incorporate that element in stoner rock. Catchyness and grooviness definitely, but relying on melodies? In a genre called stoner rock there is ofcourse a reason for that, but I thing I'd have trouble counting those bands on one hand. This is what makes Superhalo such a refreshing thing, and the fact that they pull it off great makes it only better.
Oh yes, all that greatness comes with a price. Like, €4. So basically it doesn't really come with a price. So basically it doesn't have a reason not to buy it.
~Ruben