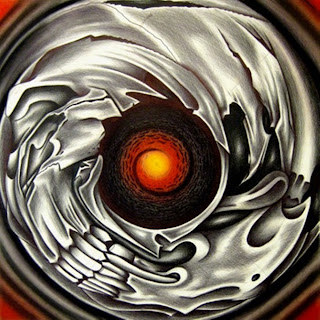 Well, what do you know? It's not all brand-new bands nobody's ever heard of we cover here, the guys of Hiram have been at it since 2002, playing some perfectly fine doominess, handing out every single one of their records for free, and yet the Facebook page still counts only 284 likes. I know, I know, it's just Facebook, but still! Eleven years and counting and never asking for something in return, in my eyes that's really damned admirable.
As are their tunes. Whatever Hiram plays is characterised by a passion for their music. No glitter, no glamour, no fame nor money, the music is what counts. Every single member is heard putting their heart and soul out there just because they want to do so. Needless to say that's something great!
Not every song on See The Thing Within The Thing can be said to be my cup o' tea though, but that's not because it isn't good, which it is. The album mostly consists of a crude, heartbreaking kind of doom, the crudeness of which really is it's appeal while at the same time it might be a little too crude. Or I might not be a avid enough doom fan, quite possibly...
The jams however are where See The Thing Within The Thing really shines in my opinion. Charming, dreamy and complex while still being really calming and relaxing, AND having the same kind of appeal as the more doomy songs. Hiram is a band I can't quite wrap my head around, and I'm happy I can't. It makes all of the band that much more interesting.
And then there's the lyrics. Really emotinally touching lyrics, telling real stories and really well-written. I won't spoil any more, go listen for yourself.
What is created by Hiram has gone unnoticed for too long already. Go and then give these men a shoutout, they deserve it.
~Ruben