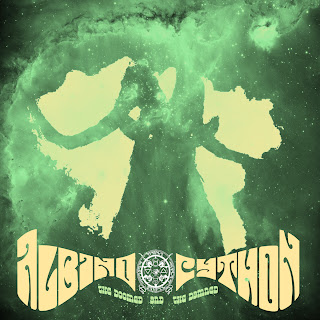 I'm not one for just making up genres or laying much weight on those countless splintering and offshoots of existing genres. Whenever I hear the likes of 'gore-grind', 'melodic metal-core' or 'blackened death-metal' used I almost inevitably loose my shit and have to storm off before I glass someone. I know, I know, I'm not a people person, but it doesn't seem like a bloody month goes by when some tosser hasn't invented, or re-invented some style and rebranded it as some bullshit proxy. I overheard the term 'post pegan war doom' a few weeks back... I'm still seething. That being said, today I feel I shall be playing the part of aforementioned tosser. But, and this is a big but, I think it is genuinely filling a gap in the market. I've used the term for years without really giving it much thought but the whole 'space doom' sound seems to be getting more and more prevalent. I'm not saying I've coined the genre, but I don't recall picking it up from elsewhere and it's not on wikipedia, so... Actually no, piss off, I am claiming this one. Besides, it seems to be the best term I can settle on without invoking narcissistic dry wrenching. It just seems to combine a few elements that have become more common place in recent years. The heavy use of distant and echoey vocals along with the occasional, particularly coherent and rhythmically satisfying riffs mostly akin space rock. Then the all encompassing dread and over noir and pace of stoner doom. All this coming together to form a sort of dark and eerie psychedelica. Often it results in that sort of occult garage rock sound thats so prevalently made a resurgence in recent times, due in no small part to the rise of bands such as Uncle Acid. But sometimes the occasional act do kinda dip their toe into that spacey side of things. It's not quite as noticable here as it is with other similar bands but their is certainly a touch of the Dozer about them. Or, what I can best imagine experiencing a really traumatic acid trip while on the space station would possibly be like. You may well disagree, fair enough. But you'll be wrong.
Anyway, this is where I see Arizona's own Albino Python. Now, at this point I'd love to give you more  info on the band, but details seem to be few and far between. By which I mean there's very little info on their Facebook page. What I can tell you is that they're female fronted, something that admittedly surprised me after having listened to their EP a good ten times or so. The vocals have that certain quality that makes them somewhat asexual for want of a better word. But now I know, I really can hear it. But who does what doesn't really matter, what matters is how EP performs, and that is exactly what it does. Gigantic fuzzy Sabbath inspired riffs and a slow crushing authority from the drums really do lay waste right from the opening bars. Whats true impressive though is its ability to maintain simplicity without becoming stupid, and retain a truly heavy feel without merging into over powering. It's such a kickass little EP, and I'm glad to report that it's finally been given the physical format it deserves! Our man Dan over at Easy Rider Records has gone to town and really helped the band out there. He's not only produced 100 cassettes of various limited availabilities, but thrown together some badges and some really, really nice shirts. These little beauties go up for sale midday (GMT) or early tomorrow morning (PST). Like all of Easy Rider's stuff they've been lovingly produced and look the mutts nutts, they wont be around for long so dont bloody snooze!