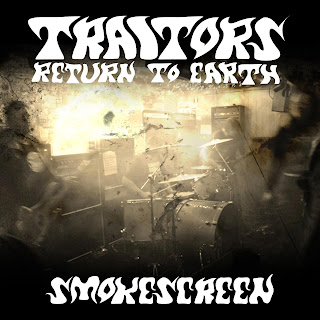 Well, we're nearly at the end of our mammoth week of updates, so what better way to kick start the weekend with some good old space rock infused angry doom and the offer of a really sexy limited edition vinyl package?
FYI, when I say angry doom, I mean exactly that. You could be somewhat forgiven for making the assumption that these guys are a garage esque desert rock kind of outfit. I certainly did, for reasons that I can't fully comprehend  I think a short perusal of their facebook page while waiting for my internet to get its ass into gear and start downloading the album, lead me to that conclusion. Maybe it was the colourful and space orientated artwork I was browsing. Two things not instantly synonymous with doom. Still, never judge a book by its cover. Although artwork can be highly evocative and beautiful if there's one thing I've learnt over the few years I've been doing this its that a lot of the time it can strike you as kinda misleading. That being said, I do entirely understand the space imagery thats been used. There really is a heavy space rock influence at work throughout this whole record. It shys away from becoming space rocks older and weirder brother - psych, but it does share a certain something with the likes of Dozer or Nebula that I just can't quite put my finger on. There's just a discrete twang or echo that sneaks in so often that can't help but ring a bell. Nonetheless, the bands feet are well and truly planted firmly within the dirty, muddy soil of doom. Chris's voice resonates with an slow angry growl usually reserved for what I can only assume is the summoning of demons. It's raw and gritty, and really blends well with low tempo crushing thunder thats created by the rest of the guys. The riffs don't exactly roll in thick and fast, but then, they don't alway need too. Sometimes they can just trundle along, like a driverless juggernaut coasting towards a children's play ground... Which happens to be exactly the image that this album evokes (in my head at least) - a sort of sense of uneasy impending carnage on the horizon. Consistently brutal from start to finish, if you are a sludge/doom enthusiast then I think this may just hit all the right notes for you. Plus, if you also happen to have a healthy (or unhealthy) love of wax then you'll be pleased to hear the guy's brand spanking new release Betting On A Full Collapse will be available from tomorrow! With awesome artwork from Ralph Winters (serious, go and have a look at his work!) you can pick the album up on the usual formats - download and cd plus one unusual medium... (I shit you not!) reel to reel! But most importantly, you can grab the thing on lovely transparent green wax via the bands BigCartel page, or if you would like one of a very limited run of just 37 gorgeous diehard pressings head to STB Records where they've given it their usual loving treatment. Consisting of the same green vinyl, this diehard version will also consist of a full colour comic book, badges and a silk screened canvas jacket! All of which, look absolutely bloody amazing. These should be up for sale at around 2pm GMT tomorrow so set your alarm and check back then!
~ Jay

For Fans Of; Elder, Kamni, Wizard Smoke, Temple Of The Smoke, Astrosoniq