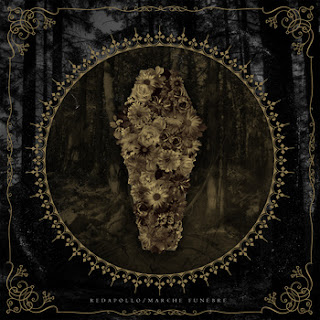 When it came to hardcore acts in my younger years, there were two schools of thought on the subject: lots of breakdowns and two-step parts, or a melodic, heightened sound that possessed a different kind of "heavy." I never truly understood the major differences between these styles until a few years later when more and more post-hardcore acts found their way into my vinyl and digital collections. There was something about not only the music, but the message in the music that began to grab my attention. Some bands vent their frustrations and pain by making music that is loud and fast, but still commercially viable, because, let's face it, nothing cures the blues like the almighty dollar. Other bands choose to play loud and fast because it's all they know and understand. I like to think at some point these bands listened to an album (or two) that was a total game-changer; a style of music or specific band that really rang true and opened their eyes to what sort of impression they wanted to have on the music world.
For years, hardcore fans have looked to the classics like 7 Seconds, Youth Brigade and Bad Brains for a semblance of something creatively pure and groundbreaking. Then an evolution of the genre came and went with on-again-off-again acts like Refused and American Nightmare that began to speak to the angst of the 21st century, but that pushed the envelope in developing a sound that cut even deeper for those discovering the frustrations of young life shadowed in a greedier, corrupt and often broken world.
Out of this wake came a global movement that, to this day, continues to shape and mold an astounding number of young acts that pay homage to their predecessors by creating music that is pure and crushing. Not because it is the aesthetic norm, but because it is all they know.
Making great strides in their native Germany, Red Apollo has quickly found their footing in the post-hardcore world, producing a sound that is ripe with talent on many levels. Where Red Apollo really excels is in their ability to continually push their tracks forward with chord-ripping guitars and textbook-pacing-be-damned drums before dropping it all for beautifully written melodies that serve as the album's segues. Amongst this transitioning sits a heap of growling and visceral vocals that are complimented by versatile backing vocals, a core dynamic for the band that never allows the songs to become stagnant.
From its ominous, brooding opening track "SIOME," Marche Funèbre sets a serious and heavy tone that erupts into a powerhouse that drives the majority of the album. In later tracks "Häxanhammer"and "A Sea Of Trees," the band brings the album to a close with passion, noting that, "This is eternity," a single line that speaks volumes for the band's effort. A strong release in the early going, Marche Funèbre is a prime example of where the post-hardcore genre is headed, which is something fans should be very excited about.
An LP version of Red Apollo's debut effort can be snagged here, or feel free to stop on over at our new affiliate Good Die Young music's shop if black/gold or clear/gold splatters are more your style. Tell 'em Ride With The Devil sent ya!
~Joe