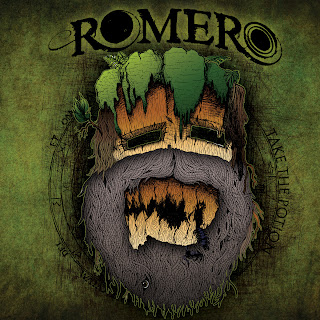 Looks like you lot are in for a pretty sweet week, as over the last five days or so I've been bombarded by killer bands from all over the globe. So from yesterdays outing to Slovenia to bath in the heavy fuzz of Voodoo Mule we now head to the States for something of a similar ilk. Crawling out from the dark and dingey depths of Wisconsin, I give you Romero. A trio that state that they are;
A clever blend of classic & modern rock & metal sounds, saturated with memorable hooks, monstrous riffs, chest pounding rhythms & irrepressible vocal harmonies. Thick, gigantic layers of guitars complimented by intelligent drumming and an utter wall of earth pummeling bass...
Sure, you get a lot of bands blowing their own trumpets when it comes to describing themselves. But I must say I honestly can't recall the last time I read a more apt band description. There's not a single euphemism, synonym or expression used in those few lines that is even mildly out of place or context. The mix of retro and modern rock and metal is absolutely spot on, like early Maiden coupled with Mastodon. The riffs come thick and fast and are delivered with such crushing waves of intensity you could swear you're listening to a group of seasoned heavy metal veteran stars not a few chaps from Wisconsin with just a couple of EP's under their belt. What's more, that intense pace actually holds up too, with every single track attempting to deliver a crushing blow at some point throughout its duration. Whether its in the form of furious volley of the aforementioned 'intelligent drumming' or one of the plethora of neck snappingly good riffs and licks that absolutely adorn this album. The mind boggles when you think that this is first true full length album from Romero, and its utterly disgusting just how bloody well they've nailed it from start to finish. A few unlucky bands suffer the old swing and a miss, then have to head back to the drawing board and start a fresh. Most others have a good dig at it but come up just shy of a home run. Often coming back on the second attempt having worked on the good parts and producing something great. Then, just sometimes there's a small, select chosen few that step out on their first attempt smack it right out of the park. Romero certainly fall into the latter. In fact as I type this, I'm currently on my forth listen of Take The Potion and with every play through my stance on them is reaffirmed. With the foundation of brutally good heavy metal, the occasional (and tactical) use of a little post rock/metal ambiance and harmonic, then the fleeting bouts of skull crushing roars and howls its hard not to come to the conclusion that this album is absolutely killer.
These guys slay and you you absolutely need this album, it's that simple. But if thats not enough for you, you can actually go and pay whatever you choose for it!... Or, if you're not a tight git, then you can actually man up and grab a physical copy in the shape of three different coloured vinyl versions limited to just 100 copies a piece.
Trust me, you'll kick yourself if you dont...
~ Jay


For Fans Of; Baroness, ASG, The Sword, High On Fire, Voodoo Mule