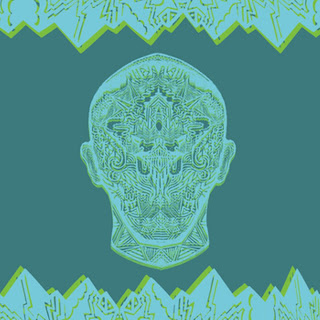 From the moment their bandcamp page loaded up I started regretting not paying the local coffeeshop a visit this morning (I'm from Holland, so I'm not actually getting a cup of coffee). Just look at renate/cordate's cover, it just makes you a little woozy in the head & guess what, their tunes do too. But then I'd probably be spacing out all day and not at all getting to write a review, and I've been postponing it a lot already now. You know you've got something good if you're not actually writing the review to just have an excuse to listen to the album again in the future. Meaning: when the album has finished playing.
renate/cordate are a Finnish band formed in 2009 and have just released their self titled debut, which they have been recording since 2011. Got not a clue what their name's supposed to mean, but I have a tendency to like things I understand jack shit of, so that's a OK. Their debut consists of four relatively lengthy songs (average about 7 minutes). It came a bit as a surprise to me that the debut of this young bunch doesn't sound like it was recorded in some basement, because, well, it's their debut and they're a young bunch. It's not that I expected it to sound bad, I just didn't expect such a quality of recording, and I'm happy my expectations were untrue because it really adds to the record.
The real strenght of this recors lies, offcourse, not at the quality of sound but at the musicians making their music. Some instrumental, spacy, psychedelic music. It starts off really easy, really relaxing, but soon it intensifies. Sweet tunes turn heavy, relaxation turns into energy, and it all comes very organic. Nothing seems forced, the song progression and even the progression from one song to another come like they were supposed to. Seems like all that time in the studio was time well spent, because it culminated in nearly a half hour of eardrums tripping balls. If you like it spacy and intstrumental, this is definitely worth a shot.
Oh, and even though the guys spent so much time in the studio (which must've cost a whole lot!) they provided us with a free download, so go over to their Facebook and say thanks, because that's really awesome.
~Ruben

For Fans Of; Earth, Omega Massif, If These Tree Could Talk, Tuber, Sungrazer