A Split From Reality... 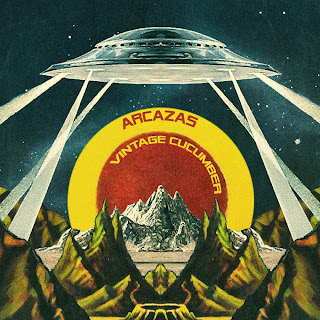 Well played, universe, the irony is not lost on me that I'm doing this review of a split right now just when The Heavy Eyes, which were planning a split with All Them Witches I looked forward to a whole lot, has called quits. Well played...
That isn't something I can hold against Felipe Arcazas & Vintage Cucumber ofcourse, quite frankly this split has been able to turn my frown upside down. First of all because it's a split, I cannot stress enough how much I love those, and secondly because it's both Mr. Arcazas and the Cucumber. The Brazilian and the German (their bio says, I'm convinced they're both from outer space) have created something that can best be described as a sitter. For who isn't familiar with the term, a sitter is basically the designated driver for psychedelics, and the reason I'm calling their split a sitter because the music is something that can definitely guide you through a trip. It's mellow, it's ambient, it's spacy, weird, never too intense and absolutely very chill. Just as you'd expect.
That's where my only complaint comes in play when it comes to both Arcazas and Cucumber, and it isn't even about the music. The both of them create music which is weird, spacy, etc etc, but meanwhile anything but experimental. Why? Because the first time you do something new it can be an experiment, but when you keep doing that, your experiment has turned to something solid, which it has and their creations only get better from that, but just because something is weird or very much so out of the mainstream doesn't mean it's experimental. That'll be the end of my mid-review terminology rant.
Back to the music; the split is set up with first three songs by Felipe, then three songs by Vintage Cucumber and as cherry on the pie a song made by the both of 'em. Now that's teamwork! The first songs by Arcazas are a bit more musicish, while it slowly transcends into Cucumber's more ambient realm, and their collaboration is one of the best ends to an album I've ever heard, it combines the rythm of the Arcazas, the vibes of the Cucumber and a whole bunch of great samples.
Overall, Felipe Arcazas does steal the show in my opinion, because he provides a more swinging deal to it all, but the split really should be listened as a whole. That's where the collaboration really shines, and when you listen to it like you're supposed to (high as a kite) then you won't (and probably can't) turn it off anyway.
Oh, it's also for free over at ther bandcamp, thought you'd like to know!
~Ruben