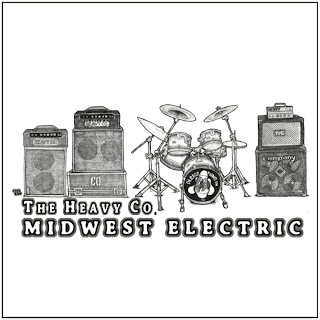 The Heavy Co. are a modern band using '60s influences, in contrast to many other contemporary bands who claim the same but are just blatant copies. That's what I like about them, even though they aren't coming up with original material, they do give it a modern and individual sound somehow. Probably because it's got some desert pouring out as well. Whatever the case, it's a solid brew, and you should listen to it if you're up for some heavy blues or a bit of psychedelica. While most of Midwest Electric consists of very bluesy grooves, Greasy Mush and Sailing Towards The Setting Sun are two very tripped out songs. Especially Greasy Mush ends up in a weird guitar frenzy, which I like. A lot.
While it definitely has it's moments, as a whole Midwest Electric doesn't please me as much as it could. I know that this is because I'm not a very big fan of blues while it is a blues record, but it just puts me off in all the places blues usually puts me off. It's too slow without any tension building up, it's not exciting, it's not really relaxing, I just don't know what to do with it. And that's a shame, because The Heavy Co. do know how to get someone to pay attention to a song, which they have proven in Greasy Mush. The rest of the record is just the same old blues in a Heavy Co. coat. It's the coat that's exciting, the rest is been-there done-that blues. Well, it's good blues, and if you're a blues fan you're more than likely going to like this record.
But there's just so much lost potential clustered within this album. They know how to create tension, they're skilled musicians, and the way One Big Drag is sung is amazing, Midwest Electric has it's own feel, sorta, and all of this makes for a great blueprint for an amazing record but it's put down by basing it all on something that stands so far from what it wants to be. It's all based on standard blues while The Heavy Co. are crying and kicking and screaming to do something else, to do something of their own. It's a missed opportunity, but luckily there will be more. I'm interested in the way The Heavy Co. will move, because they could really create something special if they dare to. Midwest Electric, for now, is not what it should be, nevertheless it's pretty good, and worth a listen.
~Ruben

For Fans Of; Lynyrd Skynyrd, The Heavy Eyes, Clutch, The Atomic Bitchwax