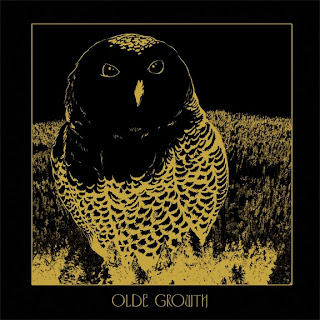 Goddamn I've missed these bastards!
For those of you not too familiar with Olde Growth, it basically boils down to this; they're one of the most fantastically awesome duo's, you'll ever want to hear. It's pretty much that simple.
Hailing from Boston, they released their first, self titled album back in 2010 and to be quite frank, it was what the term 'the dogs bollocks' was invented for. I snapped up a copy of the green vinyl when it was first released by the great Hydro Phonic Records a couple of years back and the thing's never left a metre radius of my turntable since. It was a perfect blend of sublimely heavy and melodic riffage with a  touch of rhythmic hardcore scattered over the top. It quite simply, killed. To the point where it seared into my soul the unquenchable need so see these guys live at some point before I kick the bucket. Something I'm still determined to accomplish. So when trawling through bandcamp and stumbling upon this, their new EP, I was struck by two thoughts; 1, How the hell had this eluded me for two long months!? 2, Damn, how do they plan on following up the first release up!? Alas, my questions were quickly answered and it soon became obvious that time the pair spent between recordings clearly wasn't wasted. Oh no, but what I hadn't counted on was them adopting a slightly new approche to they're entire style. Shaving off a touch of the ferocity of the first release is a bold move, especially when that was such a strong element and arguably served as the backbone for the first record, but that is exact what they've done. Don't get me wrong, Owl, is still heavy, fuzzy and decidedly dirty. It's just traded in a little of that original rawness and savagery for something a touch more polished and (for want of a better word) dynamic. But you know what?... I still absolutely, bloody love them. Despite the slight changes nothing feels amiss, or lacking in any way what so ever. There's no gaping hole where maybe you'd previously expect there to be a scream or roar and no lulls in the thunderous marriage of guitar and drums that were so prevalent in their previous release. In fact it still leaves me completely dumbstruck me to think that they are just a duo, as once again everything just feels so huge and awe inspiringly layered. The new outlook takes them down a road somewhat more in common with ASG's recent release Blood Drive apposed to their previous outing that had a closer kinship with what I can best describe as bastard child of Eyehategod and Unsane. The focus is clearly more pointed towards clarity and a clear whole hearted drive away from the sludgy and gritty anger that the first release was so bathed in. The first album's play counts will still continue to rapidly click upwards on my iTunes, and the LP still won't be leaving the close proximity to my turntable, to the point where I actually should pick up another copy, its been played so damn much. But I can't deny, these four tracks have left me pretty excited as to what the pair have got in store for a future full release.
~ Jay


For Fans Of: The Sword, Orchid, ASG, Romero, Harvester,