Some Kind Of Wondeful... 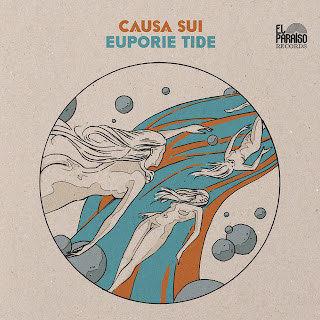 Causa Sui is kind of a special band for two reasons. The first reason is that the only way to like Causa Sui is to like their music. There is no pretention going on, no glamour, no drama, no funny stuff which might catch your interest. Basically the only thing you'll ever hear from Causa Sui is when a new album is coming out and when they're gonna play it live. Like it should be. And the second reason Causa Sui is special is because of their music, which is mindbogglingly unbelievably amazingly beautiful.
Yes, I'm a big fan of theirs and I have been for quite awhile. They're one of the first exclusively intrumental bands I've actually listened to and the main reason I've started to listen to others as well. I won't say that there aren't any other bands that are as good or even better maybe, but Causa Sui has had that little something special for me, which is why I hold their music so dear. That little something might perfectly well be the wild saxophone though.
Which brings me to their latest gem, Euporie Tide, which notably lacks that wild saxophone and shows a whole lot more of the relaxed Causa Sui, and it's really, really pretty. The record has disappointed me though, not because it lacks the sax, not because it's lesser of quality (which it definitely is not), but because it sounds like Papir. No offense to Papir, because their stuff is amazing as well, but Euporie Tide draws a lot from it. It's still Causa Sui playing, but it's Causa Sui playing Papir.
As I said, it's not any lesser quality, just lesser originality. How much of a shame it might be, Euporie Tide is still an incredible record. Just a record to chill out to completely, and not go completely nuts to from time to time. It might be that Causa Sui wanted to step away from that and such progression is a good thing, ofcourse we want our AC/DC's which remain fun, but you won't get any more quality by repeating yourself. With Euporie Tide Causa Sui have delivered a piece of quality. A whole bunch of quality. It's mindbogglingly unbelieveably amazingly beautiful. Fuckers.
Euporie Tide is definitely worth a purchase. That said, I do hope that Causa Sui find their own way on their next record. Then they'll make their own incredible music again, instead of incredible music.
Head over to El Paraiso Records - the guys home grown personal label, and preorder this little beauty while you can!
~Ruben


For Fans Of; Bear Baiting, God Is An Astronaut, Samsara Blues Experiment, Papir