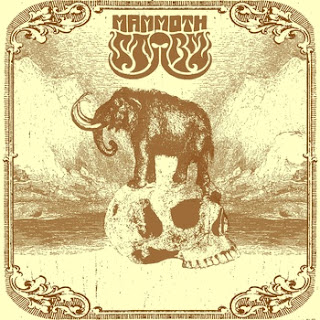 Oh those crazy Swedes. Always making their stoner doom slower, hazier and trippier.
When you first hear Mammoth Storm, it's almost as if you are hearing the soundtrack to a cult's march through the woods en route to a ritual sacrifice, or, perhaps, a solemn death march. Not too say that Mammoth Storm's music is necessarily depressing, but it sounds just that epic and grandiose. A sound that channels the best of euro death metal and slow-grinding sludge elements into nearly a half-hour of brutality that (maybe not so ironically) feels like a passing storm, wrecking everything in its path.
Buzzing guitars and simple, thudding drums pump along the band's early, three-track outing, leaving no argument to the fact that Mammoth Storm knows exactly what sort of music they want to create. From time to time, the fuzzed out melodies open up for impressive guitar solos and pedalwork, as well as eerie and haunting organ sections that create an almost Transylvanian-doom vibe. Ominous group chanting and sampled echoing also create interesting highlights on "Ancient Apocalypse," possibly the album's best track and musically impressive.
Although the work is early, it sounds clean and well-produced, especially for a three-song demo. Say what you will about Pro Tools and audio technology today, but when a band knows how to truly play (and play ti really fucking loud), that intensity shows and pays off when channeled live. Based on the raw talent and potential seen here, Mammoth Storm are poised to have a hell of a run in the metal world and I for one can't wait to hear a full album's worth of work.
~Joe

For Fans Of; Xasthur, Coliseum, Wolves In The Throne Room, Blut Aus Nord