Mountain Out Of A Mole Hill... 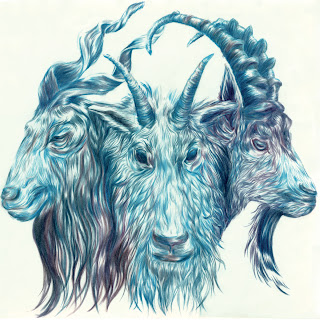 I put these guys up way, way back when I first started. In fact I'm pretty sure they were the first ever band to hit me up with some physical merch, in the form of their cracking little 7" Breeze Blows West. I wont lie, upon getting this, I did have to go back and jog my memory of just how good these guys from the big white north actually are. But don't blame me, I get sent a ton of stuff each week and they have indulged in a two year hiatus. I say hiatus, they actually split up in 2012, but reformed earlier this year. Either way, my memory was that of a trio creating a fuzzy and predominantly dark psych ambience mixed with a smattering of eerie vocals. That being said, initially Alpic completely hit me with what can only honestly be described as a curve ball. The opening track Goldenhorn bolts right out the gates like a big budget-80's cop film-synth riddled soundtrack of a horse. That same style then slightly spills over into track two, where it's greeted with a slightly new take on their original sound. Not exactly what you're expecting I grant you, but in an near imposible way it really does work. Almost like it was promising a mix of Om's God Is Good and the sound track to Drive. Powerfully churning and yet cleverly enthused with something completely different and unexpected. I realise I'm probably not entirely doing it justice here, but once I go over the initial surprise it was a really easy transition to love it. I think thats mainly because it falls just nicely short of being labelled 'avant garde', which I must admit, pleases me no end. That label, for me, has always just seemed to evoke an overwhelming sense of precociousness, which is something Holy Mount, thankfully, completely lack. Fortunately that doesn't take away from Alpic being one of the most beautifully haunting, heavily melodic and an overwhelmingly awesome breaths of fresh air I've experienced in a long long time. It boasts all the professionalism of sounding like a expertly executed and mastered soundtrack, but will all the delightful hallmarks of being ultimately home grown.
Originally putting the album up for a free download less than a week ago, the response has been immense and Bandcamp have unfortunately exercised their right to only allow a certain amount of free downloads at any one time. So in order to still make it available the guys have now had to put it up for lowest price possible. Still, at a single Canadian buck (I'm not sure what that translates to in real money) you can't go wrong. Go on, treat yourself, it's nearly the weekend now after all...
~ Jay